Release Notes
Welcome to our new Release Notes page! We generally do releases about every two weeks. This will be one of the locations where we update you on what changed in the app.

Happy Thanksgiving, all!  Our engineering team is taking some well-deserved time-off.

For migraine sufferers who log an early migraine and validate an actual migraine using the follow-up modal, we are now adding them automatically to your symptom tracker so they can be shown in features like "Share with Doctor."

Our most popular Halloween costume this week?  Bug exterminator!  We had a pesky little bug in Smart Metrics where you clicked on "Learn More" and got a blank screen.  How annoying!  But we stomped on it until it was gone.  We used a flyswatter on the Facebook login issue that some iOS users were experiencing.  One of our kind-hearted engineers took his bug (Twitter authentication) and released it out into the grass. It crawled away and we hope it never comes back.  And last, but not least, some iOS users were having a problem with restoring a previous purchase.  Zapped that pesky bug with a blue light zapper.


We also did some testing with the new Google Pixel watch that runs on WearOS 3.5 (which was just released at the beginning of October), but is also integrated with Fitbit just to make sure things are working right. So far, everything looks good!

We launched the Migraine project!  Can your heart rate help identify the early onset of a migraine? We think it can!  In this project, we're enlisting you, our faithful Cardiogram fam, to let us know when you *think* a migraine is coming on, and then also when it actually happens.  This data will be used internally only (we never share!) to help us develop a new algorithm to let you know that a migraine is coming on so you can take your meds even earlier.

In this release, we made the heartrate in the Apple Watch app larger so you can stop steaming up your eyeglasses when you're out on that jog. Update 10/24: Got some nice user feedback on this feature. Our engineers love to hear compliments for their work. "I'm 76 years old and don't like to run wearing my glasses, so the tiny heart rate digits on the watch app were a problem. I wrote to you not that long ago asking for bigger numbers. You did it! Thank you so much. Now I can quickly see how I'm doing without having to stop and strain to decode the blur." 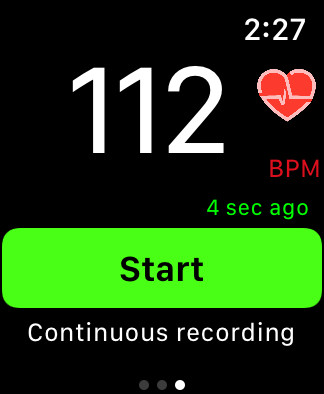 WHAT'S IN THE WORKS

Keep up-to-date with what we're currently working on, here.