With the advent of Apple Watch and Android Wear, millions of people now have heart rate sensors strapped to their wrist. To answer the questions above, we analyzed 458,000,000 distinct data points from Cardiogram for Apple Watch. The idea of 10,000 steps originated as a marketing slogan during the 1964 Tokyo Olympics, when an athletic company released a pedometer named manpo-kei, which means “10,000 step meter”. Unfortunately, the clinical evidence is scant: while there is some work correlating step count with outcomes like BMI and blood pressure, and a set of official activity guidelines, “no study to date has systematically evaluated dose-response effects of different steps/day goals.“

Resting heart rate: a metric of cardiovascular and overall health 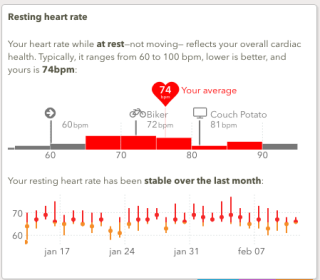 The good news is resting heart rate is highly modifiable. Exercise strengthens the heart muscle, so that it can pump the same volume of blood with fewer strokes. Marathon runners sometimes achieve resting heart rates in the 40’s.

According to the Mayo clinic, a normal resting heart rate is between 60 and 100 beats per minute. Among Apple Watch users with Cardiogram installed, the median is 76 bpm. About eighty percent of us are between 67 and 88 bpm.

So what happens if we plot average step count per day from iPhone vs your resting heart rate from Apple Watch? It looks like this, with size of bubble proportional to number of distinct people in each group: 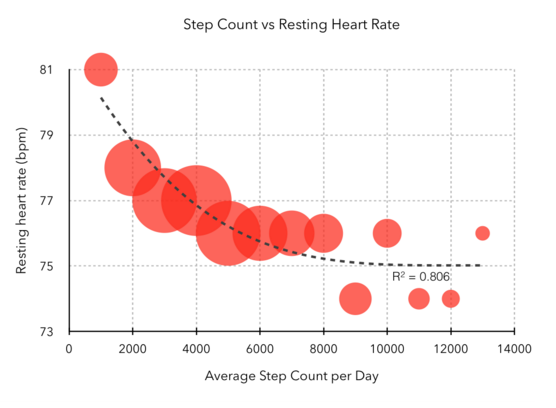 How about type and intensity of exercise?

When broken down by exercise intensity, step count becomes much less: Even if you get 10,000 steps per day, if your heart rate doesn’t go over 130 bpm, there’s not much impact on your resting heart rate. In contrast, even 4000 steps / day of high intensity exercise delivers a benefit: about a 4 bpm absolute drop in resting bpm, which doubles to 8 bpm at 10,000 steps / day.

The chart above was for an hour of exercise per week. But how much exercise do you need to get the best “bang for the buck”? Surprisingly little: